Who are the farmers protesting at Delhi’s borders, and why?

Who are the farmers protesting at Delhi’s borders, and why? 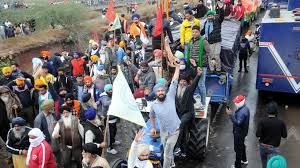 While BJP governments in UP and Haryana have failed to convince farmers, governments of Rajasthan and Punjab have extended full support to their agitation. Farmers want the Union government to either withdraw the three legislations or guarantee them the minimum support price (MSP) for their crops by introducing a new law.

Farmers march to Delhi: Who is protesting?

In a recent affidavit filed in the Punjab and Haryana High Court pertaining to the preventive arrests of several leaders, the Haryana government termed majority of these groups as “oganisations with history of indulging in criminal activities, creating law and order problems and disturbing public peace and order.

Why are farmers angry?

What are these new agricultural reforms ?

The Farmers' Produce Trade and Commerce (Promotion and Facilitation) Act, 2020

The Farmers (Empowerment and Protection) Agreement of Price Assurance and Farm Services Act, 2020

How did matters escalate to this situation?

What has been the response of the governments at the Centre, Haryana and Punjab so far?

Punjab, Haryana farmers protest: What can be expected now?