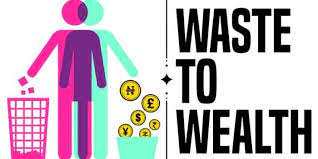 Context: With an ever increasing population and rapid pace of urbanization, India is facing a huge challenge of waste management.