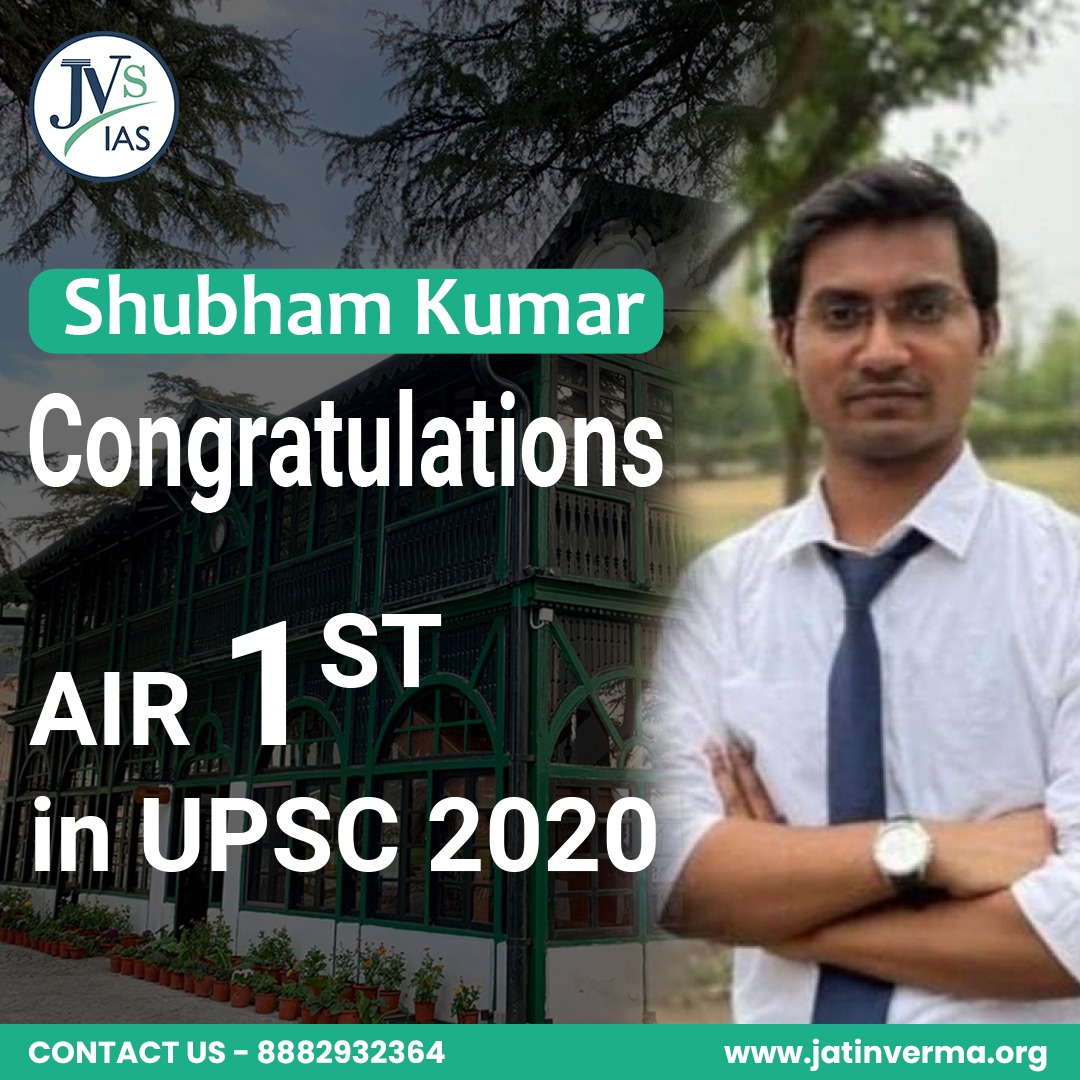 The Goods and Services Tax (GST) is a value-added tax levied on most goods and services sold for domestic consumption. The GST is paid by consumers, but it is remitted to the government by the businesses selling the goods and services. In India, GST Bill was first introduced in 2014 as The Constitution (122nd Amendment) Bill.

This got an approval in 2016 and was renumbered in the statute by Rajya Sabha as The Constitution (101st Amendment) Act, 2016. Its provisions:

Article 246A – States have power to tax goods and services


GST is categorised into Central GST (CGST), State GST (SGST) and Integrated GST (IGST) depending on whether the transaction is intra-State or inter-State.

Central GST: CGST is a tax levied on intra-State supplies of both goods and services by the Central Government and is governed by the CGST Act.

State GST: SGST is also levied on the same intra-State supply but will be governed by the State Governments.

This implies that both the Central and the State governments agree on combining their levies with an appropriate proportion for revenue sharing between them.

However, it is clearly mentioned in Section 8 of the GST Act that the taxes be levied on all intraState supplies of goods and/or services but the rate of tax shall not be exceeding 14%, each.

Integrated GST: IGST is a tax levied on all inter-State supplies of goods and/or services and is governed by the IGST Act.


It was indeed a historic occasion and a paradigm shift as India moved towards ‘One Nation, One Tax, One Market.’ The global experience has shown that implementation of GST results in numerous benefits for all stakeholders. In the Indian GST regime, the consumers will benefit from lower prices due to removal of cascading in taxes and efficiency gains.

The GST has already been introduced in nearly 160 countries and France was the first to introduce GST in the year 1954. In view of numerous benefits GST brings into the economy, introduction of GST has been on the political agenda of the country for quite some time. The journey to introduction of GST in India has been long and is a culmination of the efforts of many political leaders, economic thinkers and officers of the Centre and the State Governments.

As introduction of GST required constitutional amendment, the political consensus could not be garnered for a long time. The efforts to introduce GST in India picked up momentum after the formation of the present Government.

The Constitutional amendment empowers the Centre and the States to levy and collect the Goods and Services Tax (GST). The GST has been defined as a tax on supply of goods or services or both, except supply of alcoholic liquor for human consumption. Thus, alcohol for human consumption has been kept out of the GST by way of definition of the GST in the Constitution. On the other hand, five petroleum products viz. petroleum crude, motor spirit (petrol), high speed diesel, natural gas and aviation turbine fuel have temporarily been kept out and the GST Council can decide the date from which they s hall be included in GST. 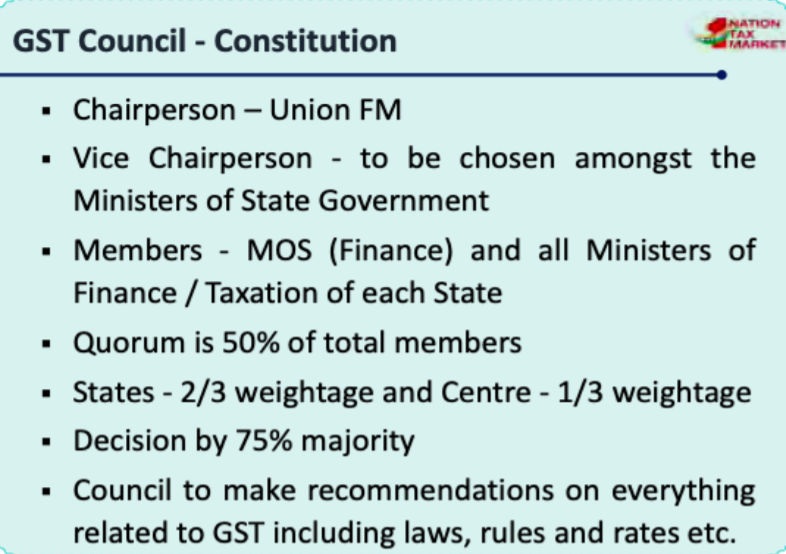 Compensation to the States:

As GST is a destination based tax, there was apprehension amongst some states, particularly manufacturing states, that implementation of GST may result in loss of revenue for them. Therefore, the Constitution (One Hundred and First Amendment) Act, 2016 provides for compensation to the States for loss of revenue arising on account of implementation of the goods and services Tax for a period of five years. Based on the recommendations of the GST Council, the Goods and Services Tax (Compensation to States), Act 2017 has been enacted.

The Compensation Act has fixed the revenues of the year 2015-2016 as the base year revenues and further a nominal annual growth rate of 14 per cent has been provided. The Act provides for levying of a cess, which shall be used for compensation to the states in case there is loss of revenue. This cess shall be levied on luxury items and goods

In the first two months of the current financial year, 2020-21, the cumulative GST revenues of states and the Centre has been only 45% of the monthly target.

In 2020-21, the combined monthly GST revenue target is estimated at Rs. 1.21 lakh crore taking into account the budget estimate and states’ protected revenue.

As revenue has fallen for both the Centre and states, the GST Council has decided to hold a single-point agenda meeting in July, 2020 which will discuss market borrowing by the Council itself as one of the ways to raise money and compensate states for GST revenue losses.


The National Anti-Profiteering Authority (NAA) was constituted under Section 171 of the Central Goods and Services Tax Act, 2017.

The Authority’s main function is to ensure that traders are not realizing an unfair profit by charging high price from consumers in the name of GST and to examine and check such profiteering activities and recommend punitive actions including the cancellation of Registration.

NAA comprises of Chairman, four Technical members, a Standing Committee, Screening Committees in every State and the Directorate General of Safeguards in the Central Board of Excise & Customs (CBEC). 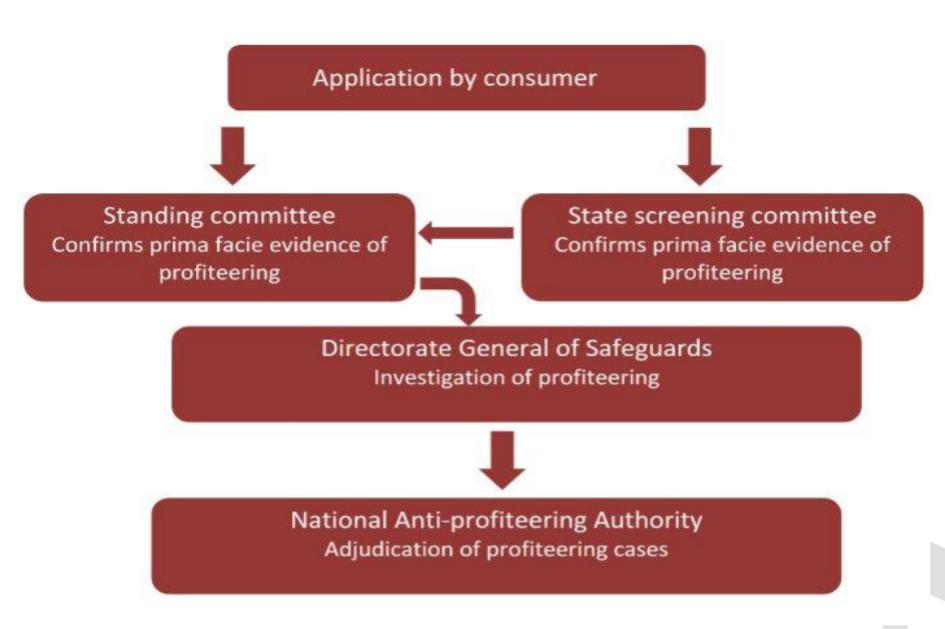 The problem with GST is that, the tax, like all taxes, is dependent on the economy doing well. Conceptually, the GST should broaden the tax base. The tax GDP ratio could increase to 16 per cent from the current 10 per cent. However, whether this would be achieved, would depend on the next year or so. Specially on how the government and industry manage to work in tandem to smoothen the overall transaction and rate of compliance.


States, on the other hand, face an ever increasing cost curve. With the 7th Pay Commission being implemented, their wage bills are expected to go up considerably. A rush to write off farm loans started by Uttar Pradesh, has till now seen three state governments agreeing to write off loans. The problem for the states and the centre is that already a debt time bomb is ticking, which risks turning India into another Greece. India’s public debt, which is the sum total of central and state debt, as a percentage of GDP already stands at 67 per cent, the highest among major Asian economies, except for Japan


One may recall, that when the issue of division of financial powers between the Union and provinces came up in the Constituent Assembly, many MPs including from the Congress had argued in favour of giving more powers to states. However, the fear of excessive federalism was cogently argued as being against the spirit of One India and the framework which thus came out tended to focus legislative and taxation powers with the centre rather than with the states.

Goods and Services Tax Network is a not for profit, non-Government, private limited company. The restructured GSTN stake with 100 per cent government ownership, will be acquired equally between the Centre (50%) and the states (50%). The decision was based on the rationale that a vast amount of GST-related data should be completely under the government’s supervision, as it is a repository of sensitive information of over 1 crore taxpayers. GSTN has been set up primarily to provide IT infrastructure and services to the Central and State Governments, tax payers and other stakeholders for implementation of the Goods and Services Tax. The Authorized Capital of the company is Rupees ten crore. Creation of common and shared IT infrastructure for functions facing taxpayers has been assigned to GSTN and these are filing of registration application, filing of return, creation of challan for tax payment, settlement of IGST payment , generation of business intelligence and analytics.

It is true that the Southern state has done remarkably well in its social parameters – its health and education parameters have helped catapult it way ahead of its rivals and are comparable to that of Organisation for Economic Co-operation and Development (OECD) countries. In the words of economist Jean Dreze “Kerala and Tamil Nadu routinely come at — or near — the top in rankings of summary development indexes, they also surpass other States in terms of the speed of improvement.”

Legally speaking the GST Amendment Act effectively transfers the power of taxation over large swathes of possible taxation to an unelected body.

Under The GST (Compensation to States) Act, 2017, states are guaranteed compensation for loss of revenue on account of implementation of GST for a transition period of five years (2017- 22). The compensation is calculated based on the difference between the states’ current GST revenue and the protected revenue after estimating an annualised 14% growth rate from the base year of 2015- 16.

The high rate of 14%, which has compounded since 2015-16, has been seen as delinked from economic realities. Chairing the first few meetings of the GST Council, then Finance Minister Arun Jaitley had proposed a revenue growth rate of 10.6% (the average all-India growth rate in the three years preceding 2015-16). Council meeting records show the suggestion of 14% revenue growth was accepted “in the spirit of compromise”.

What is Input Tax Credit?

Input credit means at the time of paying tax on output, you can reduce the tax you have already paid on inputs and pay the balance amount

When you buy a product/service from a registered dealer you pay taxes on the purchase. On selling, you collect the tax. You adjust the taxes paid at the time of purchase with the amount of output tax (tax on sales) and balance liability of tax (tax on sales minus tax on purchase) has to be paid to the government. This mechanism is called utilization of input tax credit. 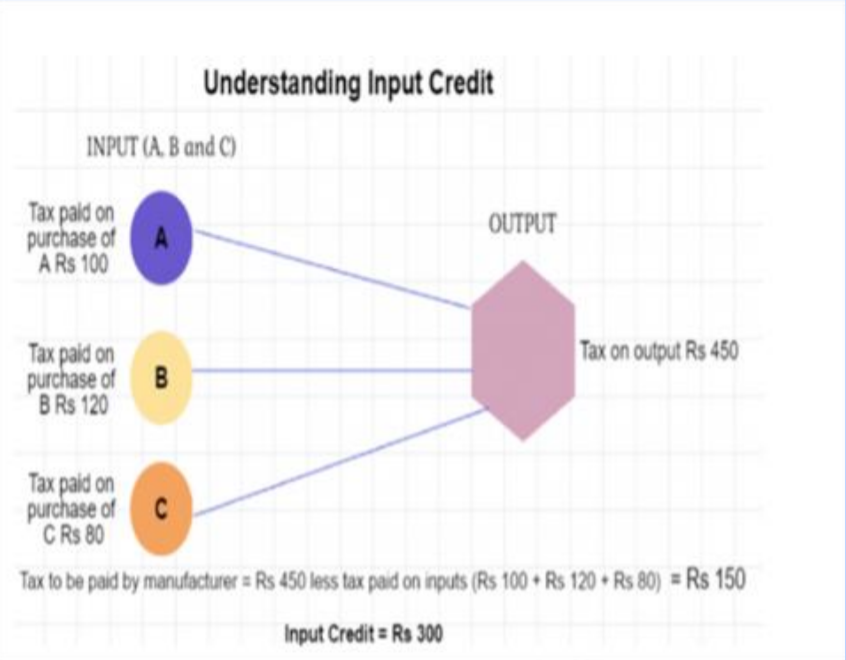 What the future holds for India’s tax structure and balance of powers between the Union and states is something which the Indian polity shall decide over time. However, the last word may not have been heard over GST and states, seeking to augment their resources may well seek changes in the law in the not too distant future.

Thus GST is a positive step towards shifting Indian economy from the informal to formal economy. It is important to utilise experiences from global economies that have implemented GST before us, to overcome the impending challenges.