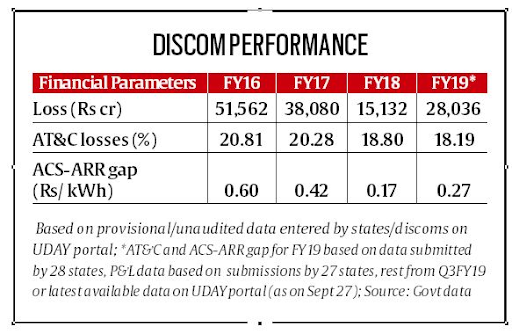 Context: State-owned distribution utilities (discoms) continue to be in fragile financial health. In its budget 2021-22, the Union government had announced the launch of a “reforms-based and results-linked” scheme for the distribution sector with the objective of improving the financial health and operational efficiency of discoms.

Their precarious financial position is due to the high level of aggregate technical and commercial (AT&C) losses, the levy of inadequate tariffs when compared to the cost of power supply, and insufficient subsidy support from state governments.

Concerns with the scheme

As a consequence, a cost-reflective tariff determination process, coupled with the timely pass-through of power purchase costs, remains critical for the utilities. In addition, the delicensing initiative proposed by the central government can effect significant changes in the distribution segment, facilitating competition and placing emphasis on the quality and reliability of power supply and consumer services. However, strong political will and support from state governments are needed to ensure movement on all these issues.