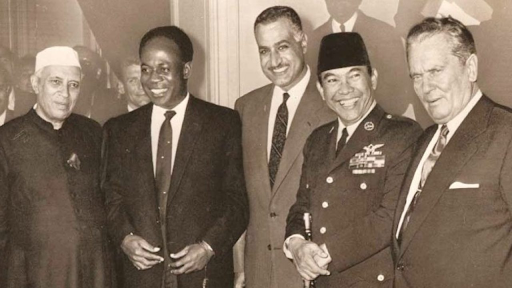 Context: The birth anniversary of Jawaharlal Nehru and the 60th anniversary of the Non-Aligned Movement prompt reflection on Nehru’s major contribution to the field of international relations.

The Non-Aligned Movement is a Movement of countries representing the interests and priorities of developing countries who didn’t align with any superpower during the cold war era. The Cold War was a period of geopolitical tension between the United States and the Soviet Union and their respective allies, the Western Bloc and the Eastern Bloc, which began following World War II. The Union of Soviet Socialist Republics (also known as the USSR or the Soviet Union) consisted of Russia and 14 surrounding countries.

Reasons for failure of NAM

In essence, the Indian non-alignment idea began, lived and died along with Nehru’s idealism, though some features were retained to sustain diplomatic flexibility and promote India while its economic situation improved sufficiently to be described as an ‘emerging’ power.