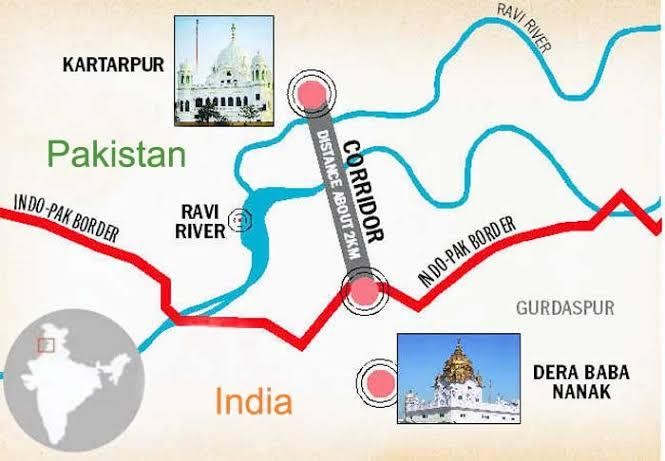 Prime Minister inaugurated Integrated Check Post and flagged off the first batch of pilgrims at Kartarpur Sahib Corridor in Gurdaspur, Punjab. The first data of over 500 Indian pilgrims crossed the 4.2-km stretch from Gurdaspur to Gurdwara Darbar Sahib in Pakistan’s Kartarpur on November 9.

Kartarpur corridor: Kartarpur marks the most significant and constructive phase in the life of Guru Nanak Dev.

The Union Cabinet passed a resolution in 2018 to celebrate the historic occasion of 550th Birth Anniversary of Shri Guru Nanak Devji in a grand and befitting manner, throughout the country and across the globe. Nanak’s followers started observing the day of his enlightenment as his birth anniversary, even though he was born in April 1469.

The Union Cabinet approved the building and development of the Kartarpur Sahib Corridor from Dera Baba Nanak to the International Boundary, to facilitate pilgrims from India to visit Gurdwara Darbar Sahib Kartarpur, round the year, in a smooth and easy manner.

The Agreement with Pakistan: It provides a formal framework for operationalisation of the Kartarpur Sahib Corridor.

Highlights of the agreement:

It has all the necessary public amenities like kiosks, washrooms, childcare, first aid medical facilities, prayer room and snacks counters inside the main building.

The importance of Kartarpur in the Sikh religion

Who are Nanak Naam Lewa?

The core values of Guru Nanak’s philosophy are not based on any one religion and nor are the Nanak Naam Lewa Sangat, who belong to other religions too.

When the place got flooded, Nanak’s son Sri Chand dug up the urn and brought it to Pakhoke Randhawa (Dera Baba Nanak) where Gurdwara Dera Sahib was built on it.