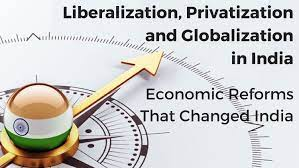 Context: Thirty years ago, the liberalization regime launched in 1991 completed its 30 years in 2021.

Past experience shows that we need to get back to 7% to 8% growth if we want to make progress on poverty reduction and provide enough jobs for our growing labour force.

The 1991 reforms helped the economy stave off a crisis and then bloom. It is time to outline a credible new reform agenda that will not just bring GDP back to pre-crisis levels, but also ensure growth rates higher than it had when it entered the pandemic.