India-Russia Relations I Significance of the Relationship 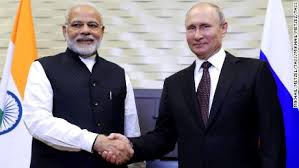 India-Russia Relations: Prime Minister of India visited Vladivostok, Russia in September, on a two-day visit to participate in the 20th India-Russia Annual Summit and the fifth meeting of the Eastern Economic Forum (EEF).

Key Takeaways from the summit

Indo-Russia relationship is a time-tested relationship where both the countries recognized development as a key pillar of their relations. The relationship has gained its momentum after the signing of the “Declaration on the India-Russia Strategic Partnership” in October 2000. Historical Perspective of Indo Russian Relationship Indo-Russian relations began to blossom only in the 1960s and 1970s. Over the past several decades, Indo-Russian relations had been marked by a high degree of political and strategic trust. As the relationship evolved, it gained strength based on five pillars such as similar political and strategic perceptions of the world; intensive military-technical cooperation; strong economic bonds;  deep ties in science and technology; and people-to-people and cultural links.

Major Areas of Cooperation between India and Russia

Significance of the Relationship

Russia-India-China (RIC) Forum RIC as a ‘diplomatic brand’ was born when three foreign ministers held the first trilateral meeting on the sidelines of the United Nations General Assembly in New York in 2003. It was originally conceived by the former Russian Foreign Minister, Yevgeny Primakov. He pitched for a strategic triangle between Russia, India, and China.

Significance of the RIC: The forum is a significant one in the context of various geopolitical issues such as regional security, issues affecting the Asia-Pacific region, counter-terror efforts and coordination. The importance of the forum are as follows-

The challenge in front of India and Russia is that they need to transform the 20th-century partnership and make it fit for the 21st century. Global trends are evolving rapidly and major powers are re-defining their ties with each other to match their contemporary requirements.

Way-Forward Despite these strains, a strong India-Russia relationship is important because it gives extra maneuvering space for both countries vis-a-vis other actors.

There is a broader scope for a “third” order, centered on Indo-Russian lines. The third order is reflective of the geopolitical realities in the region, based on a multi-polar, rules-based, mutually beneficial framework.