Context   A recent study conducted by IIT Delhi in collaboration with Universities of California, Illinois and the Delhi based NGO Urban emissions has pointed out that the use of firewood, kerosene and also coal in the households contributed to about 40% of the PM 2.5 pollution in the Gangetic basin districts.   Background concepts to understand the issue   Concept 1: Particulate Matter 2.5 (PM 2.5)

Concept 2: National Ambient Air Quality Standards (NAAQS)     The Issue   Highlights of the Report         Case of Delhi NCR   However, even if this was achieved in the NCR, it would still not help achieve the pollution targets as several other factors complicate the issue for NCR:   Although most of these issues plague other areas as well, NCR is severely affected due to high density of these activities and there being no outlet due to land locked location of the NCR.   Accordingly, although eliminating household emissions will be a step in the right direction, the NCR needs a more multi-pronged approach to overcome the scourge of pollution.   National Clean Air Programme (NCAP) 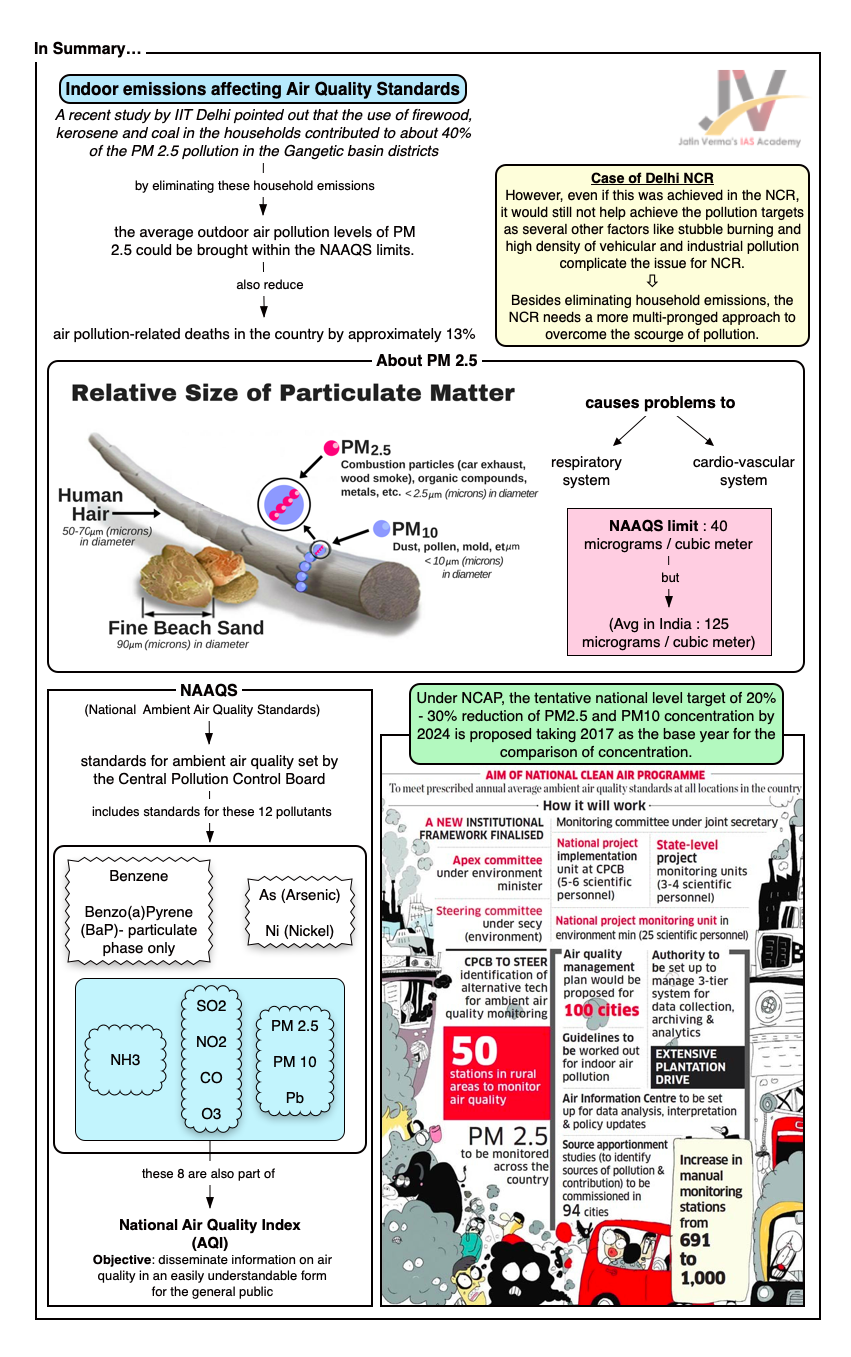 Vantage Point for PT   Well, in the cities of our country, which among the following atmospheric gases are normally considered in the calculating the value of Air Quality Index (AQI)? Now select the correct answer using the code which is given below. (a) 1, 2 and 3 only (b) 2, 3 and 4 only (c) 1, 4 and 5 only (d) 1, 2, 3, 4 and 5   Explanation:   This question was asked in PT’2016.  In the National Air Quality Index, there are six AQI categories, namely Good, Satisfactory, Moderately polluted, Poor, Very Poor, and Severe. And, the AQI (Air Quality Index) considers the eight pollutants (PM10, PM2.5, NO2, SO2, CO, O3, NH3, and also Pb) for which short-term (up to 24-hourly averaging period) the National Ambient Air Quality Standards (NAAQS) are prescribed. So, the correct answer is (b).   Smart Strategy: Please also note that Carbon dioxide is not in the AQI (or even NAAQS) list. If you remembered this fact alone, then the above question could have been answered by elimination. CO2 is mentioned in options (a), (c) and (d) and hence, they all get eliminated, leaving you with the right answer which is (b).