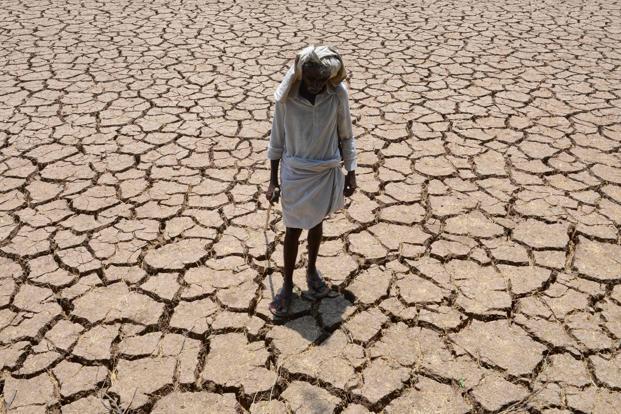 Drought situation has intensified in the Maharashtra and Karnataka. In nine out of the past 15 years, about 100 districts of the country have witnessed a drought like-situation, triggered by the failure of south-west monsoon.

Some important facts about the drought in India According to the Drought Early Warning System, more than 40% of the area of the country may face drought. The present crisis has been caused by deficient pre-monsoon rain in this season. In India, drought occurs mainly due to the deficient monsoon. It is a permanent disaster in India that affects 50 million Indians every year. 33 per cent of the country is chronically drought-affected while close to 68 per cent areas are drought-prone.

Classification of drought The National Commission on Agriculture in India classified three types of drought:

Meteorological drought: It is defined as a situation when there is a significant decrease from normal precipitation over an area (i.e. more than 10 %).

Agricultural drought: It is a situation when soil moisture and rainfall are inadequate to support healthy crop growth.

Factor affecting the incidence of drought in India Condition of drought in every region of India could be different depending upon a few factors. For example, during a crop season even a well distributed 400 mm rainfall in the semi-arid regions, could be adequate for the sustenance of crops, whereas, even an annual rainfall of 1,000 mm, in high rainfall regions like Assam, could still create a potential for drought-like development. Following are a few factors that play an important role in drought occurrence:

Causes of drought in India   Region-wise Rainfall variations: South-West Monsoon is a major source of rainfall in India. It provides for about 73% of the total annual rainfall received in the country. But the duration of this season is very short.

Over-exploitation of groundwater: Over-exploitation together with the factors like sub-optimum conservation and storage capacity of surface water leads to inadequate water supply for irrigation.

Limited irrigation: Irrigation coverage in the country is limited. Net irrigated area in the country is less than 50%. It creates complete dependency of the farmers in these areas on rainfall thus exacerbating the effect of drought.

Impacts of drought Disruption of the supply chain: Industries that are depending upon the agriculture suffers due to a shortage of raw material supply and high prices. It dries up incomes and revenue stream negatively affecting employment increased dependence on imports, and lowering of overall market sentiments. 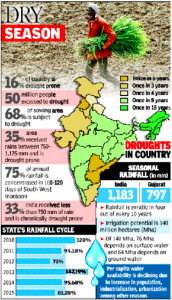 Norms for drought declaration in India Department of Agriculture, Cooperation & Farmers’ Welfare is the nodal agency for dealing with the drought situation. Drought Monitoring Cells (DMCs) in the States will monitor data regularly on the following parameters

Depending upon the indicators mentioned above, the drought can be categorised into:

The State Governments will declare drought through a notification. The notification will be specifying clearly:

If the calamity is of severe nature, a Memorandum for assistance under the National Disaster Response Fund (NDRF) will be submitted. The State Governments on receipt of Central assistance from the NDRF shall ensure disbursement to the affected farmers. Drought management Drought Prevention and Preparedness Prevention and Preparedness mean pre-disaster activities designed to increase the level of readiness and improvement of operational and institutional capabilities for responding to drought. It includes

Drought mitigation measures Long term mitigation measures are geared towards the adaptation to climate change, restoration of ecological balance through the adoption of sustainable agronomic and conservation practices, sensible crop choices etc. These measures include:

Challenges in Drought Management The primary responsibility of drought management is of state management. Whereas the central government supplements their efforts.

Drought management in India has been on papers only, there are no concrete steps taken on the ground. Recurrence of droughts in the same areas since decades is the result of this policy negligence. It is the high time and now the Government should come up with the implementation of some best practices for water management.

Also read: All out at sea: on India’s engagements in the Indian Ocean New Version of Akash Missile Test-Fired Successfully