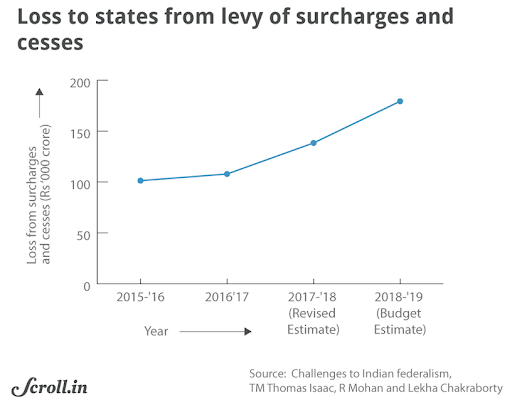 Context: The latest audit of the Union Government’s accounts tabled in Parliament this week reveals that the Finance Ministry quietly retained over 40% of all cess collections in 2018-19 in the Consolidated Fund of India (CFI).

Levy of cess and surcharges by the central govt.

Concerns with the govt’s move: The Union government is now relying more and more on cesses and surcharges which are not shared with the states. It reduces the sharable portion of Centre’s gross tax revenue (GTR).

Way forward: Revenue buoyancy, end of GST compensation period and Centre’s increasing reliance on cesses and surcharges—all should be considered together because they are interlinked.

Finally, absolute transparency is needed in the management of cess receipts so that Parliament and the people do not need to wait for audit findings to learn of this subterfuge.