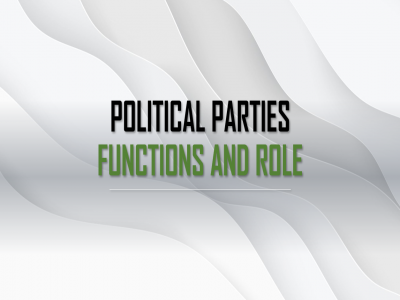 You have already read about that political parties are essential for the proper functioning of representative democracy. They perform vital functions in every political system. It is important to know who places candidates before the electorate when there are elections in the country?

Do you know who carries out campaigns during elections? Have you ever realized how a government is formed and who is nominated as the Prime Minister or the Chief Minister?

In India political parties have been performing the above-mentioned functions quite effectively since independence. They have made representative governments in India both possible and successful for over six decades.

They provide effective links between the citizens and the governments on the one hand, and the electorates and their representatives on the other. They try to cater to people’s demands on public matters and mobilize political participation.

Elections without parties would have almost been impossible. In fact, democracy needs strong and sustainable political parties with the capacity to represent citizens and provide policy choices that demonstrate their ability to govern for the public good.

The experience of the functioning of political parties in India during the last six decades indicates that by and large, they have been instrumental in shaping public opinion, creating political awareness, and imparting political education to the people.

They successfully form the governments where they receive the mandate of the people and implement their respective policies and programmes both at the Centre and in the States. They have contributed towards making the institutions and processes of government truly democratic.

We can, therefore, say that democracy in India has been strengthened by a competitive and multi-party system.