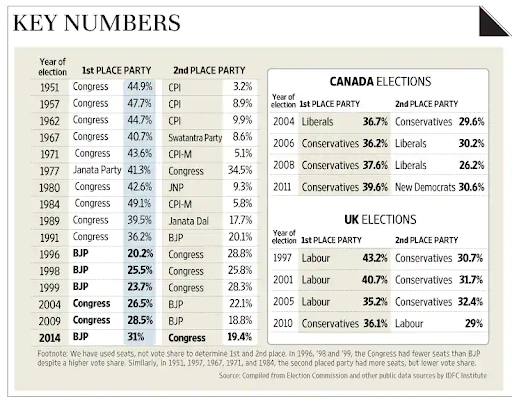 Context: India’s parliamentary democracy is going through a phase of intense confrontation between the dominant ruling party and a weakened but belligerent Opposition.

Emergence of a second dominant party system in India

At the national level, 2014 marked the end of a 25-year period of a coalition/minority government. And post-2014, there was the emergence of a second dominant party system.

The critics of the FPTP system have called for reexamining this constitutional choice and have argued for adopting the system of proportional representation. They believe that this system is undemocratic and unrepresentative of diverse identities.

This system is used in India in direct elections to the Lok Sabha and State Legislative Assemblies.

The advantages and benefits of a FPTP voting system

But the FPTP system can’t be blamed for polarisation in Indian Politics. Polarisation is linked to the politicisation of certain social cleavages.

This system avoids the anomalous results of plurality/majority systems and is better able to produce a representative legislature.

Reasons behind Deteriorating relations between the ruling party and the Opposition

There is a perception that the ruling party is pushing against the constitutional consensus, which is fairly strong in our system.

The larger point is if we artificially try to make the political system fairer, the natural competitiveness gets distorted and that is why India should generally prefer FPTP, both on the grounds of voters’ convenience and a natural competitiveness being allowed in the system.There is sufficient diversity at the societal level. There is the theory that in a socially diverse country, the party system will be diverse — it will not be limited to a two-party system.