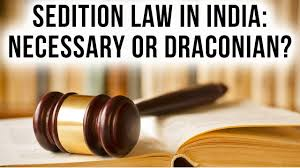 Context: In May 2022 The Supreme Court of India directed the Centre and States to suspend all pending trials, appeals, and proceedings with respect to the charges framed under Section 124A of the Indian Penal Code (IPC), which deals with the offense of sedition.

Stand of Central Government on the Law of Sedition: The central government is on the stage of reconsideration of the colonial laws.

Post-Independence: a large chunk of around 1200 archaic laws were scrapped at the time of independence. Indian system of governance is still influenced by the colonial laws directly (Sedition) or Indirectly.

What is and What not is Sedition as per IPC:

Section 124A of IPC defines sedition as: “Whoever, by words, either spoken or written, or by signs, or by visible representation, or otherwise, brings or attempts to bring into hatred or contempt, or excites or attempts to excite disaffection towards, the Government estab­lished by law shall be punished with im­prisonment for life, to which fine may be added…”

Origins of the sedition law:

Thomas Macaulay drafted the Indian Penal Code, which included the law on sedition, however, it was later added as an offence in 1890 through a special act. The punishment prescribed was transportation beyond the seas for the term of his or her natural life. This was amended to life imprisonment in 1955.

Use Of sedition act against the Independence Movement: The provisions of Section 124A were used against the freedom fighters like Tilak, Annie Besant, Shaukat Ali, and Muhammad Ali, Maulana Azad, and Mahatma Gandhi in order to curb the political dissent.

The legality of the Law and Interpretation by Courts:

Initially, courts followed a literal interpretation which turned into a disposition to render obedience to all lawful authority and support it against the unlawful attempts to resist that authority.

The Constituent Assembly members had differing views on sedition as an exception to the fundamental right to freedom of speech and expression Therefore constitution nowhere mentions the word sedition. However, in the initial phases of Independence Sedition was necessary to be kept as a part of the legal structure.

In Queen Empress v. Bal Gangadhar Tilak took place in 1898 it was held that 'disaffection' is the equivalent merely of ' absence of affection.

Cases so far against IPC Section 124A:

Guidelines on using the new, restrictive definition of sedition law, the court said not all speech with “disaffection”, “hatred,” or “contempt” against the state, but only speech that is likely to incite “public disorder” would qualify as sedition.

Punishment under IPC Sec 124A:

What is the need for such a law:

What are the Underlying Problems of This Law:

E.g: in Vinod Dua v Union of India, 2020 the Supreme Court quashed the FIRs charged against the journalist for criticizing the government in power for mishandling the COVID-19 crisis and cautioned against unlawful application of the 124A.

A fresh challenge to sedition law:

A group of journalists and some politicians, Kishorechandra Wangkhemcha, Kanhaiya Lal Shukla; and Trinamool Congress MP Mahua Moitra, among others have recently filed a new petition against this law.

The Supreme Court has agreed to hear such petitions through a much larger seven-judge bench.

What else: The bench will consider whether the Kedar Nath ruling was correctly decided or not.

The Government: in a fresh answer the central government told the court that it is mulling a fresh review of the colonial law.

The petitioners demanding the removal of the archaic law have argued that the restrictive Kedar Nath definition of sedition can be addressed through several other laws also e.g: the Unlawful Activities Prevention Act (UAPA).

Sedition laws in other countries

In the United Kingdom: The sedition law was officially repealed in  2009, citing a chilling effect on freedom of speech and expression. The common law on sedition was termed arcane and from a bygone era when kings used to enjoy the divine Right to rule and when freedom of expression wasn’t seen as the right it is today.

In the United States: In spite of its liberal and democratic values, the law of sedition still exists in the US today. Sedition is a federal crime regarded in the US and many other judicial systems as more serious than a misdemeanor. It is now being used against rioters involved in the January 6 attack on the Capitol.

Australia: It repealed its sedition law in 2010.

Singapore also repealed the law in 2021, having other laws to deal with the sedition.

The way forward: As the government is considering the law, judicial intervention remains crucial. As witnessed in the case of Amendability of fundamental rights for implementing DPSPs the tussle between judiciary and legislature ended up in the formation of the doctrine of basic structure. India has been following a stringent approach of least tolerance towards anti-national, secessionist, and terrorist elements which should be continued. However, A pragmatic way to save the right to freedom of speech and expression of Indians and to secure the public order for nations' growth must be invented.