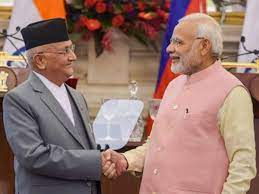 He Prayed at the Mahaparinirvana Stupa in Kushinagar. He talked about the various Government efforts made to boost infrastructure in Kushinagar so that more tourists and pilgrims can visit.

Both the countries owe equally to Buddhism for their spiritualism as well as tourism. The feeling of discomfort among Nepali Buddhists was generated due to the display of Buddhism as more Indian than Nepali.

The major tourist package deals for pilgrims from across the world used to make a fleeting visit to the Buddha’s birthplace only, before being herded back to Buddhist shrines in India, denying Nepal its due economic gain.

Indian Prime Minister Narendra Modi visited Lumbini this May, marking his fifth trip to Nepal since his first election as prime minister in 2014. This, however, is his first Nepal visit since his re-election in 2019. This was termed as a trip to deepen “time honored ties”.

Significance of the visit:

The Brief about program:

What are the issues of current discussion:

Diplomatic suggestions make us believe that the visit should open new horizons of cooperation and partnership between the two sides and erase irritants in relations.

We are linked by culture, civilization, and religion, but that is only one dimension of our ties, this visit should open more dimensions to bilateral relations economically and politically.