Ecological pyramids are graphical representations of trophic levels in an ecosystem. They are pyramidal in shape and they are of three types: The producers make the base of the pyramid and the subsequent tiers of the pyramid represent herbivore, carnivore and top carnivore levels. 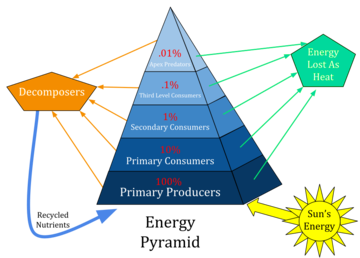 Pyramid of energy: This pyramid represents the total amount of energy at each trophic level. Energy is expressed in terms of rate such as kcal/unit area /unit time or cal/unit area/unit time.eg. in a lake autotroph energy is 20810 kcal/m/year. Energy pyramids are never inverted.