Diplomatic Challenges From The Muslim World

Diplomatic Challenges From The Muslim World 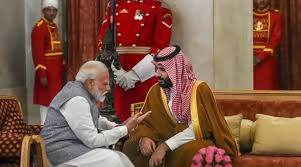 India is a country with one of the largest Muslim populations in the world .Recently, India witnessed  criticisms from foreign governments and from students of these countries for certain policy measures taken by the government.

India’s response to the criticism:

What is The bond of Islamism?

Why Saudi Arabia is against the Brotherhood?

Saudi Arabia did not join other Muslim nations in criticizing India in response to recent domestic developments: the bigger threat Saudi arabia faces is to its leadership of the Muslim ummah (community) from the emerging Islamist alignment of Turkey, Qatar and Iran.

Ties between India and the Gulf: