Analysis Of Damage To Property Act

Analysis Of Prevention of Damage To Public Property Act 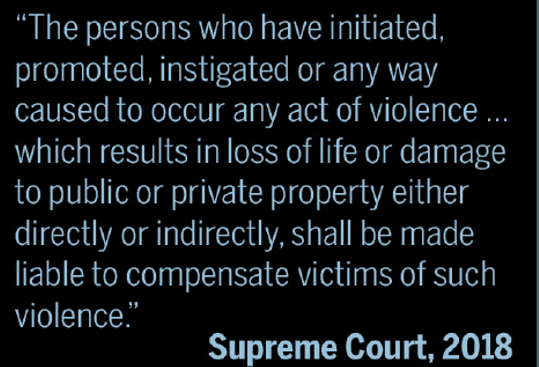 The Delhi Police has written a letter to the Delhi High Court seeking the appointment of a Claims Commissioner to assess the damage caused to public property during the Anti-Citizenship Amendment Act (Anti-CAA) protest in the city.

Cases of damage to property

The loss to property in recent protests

What does the law say regarding recovery of damages to public property?

The Nariman Committee’s recommendations dealt with extracting damages for destruction. Accepting the recommendations, the court said the rioters would be made strictly liable for the damage, and compensation would be collected to “make good” the damage.

Supreme Court guidelines: In 2009, in the case of In Re: Destruction of Public & Private Properties v State of AP and Ors, based on the recommendations of the two committees, the Supreme Court in 2009 issued the following guidelines:

The right of citizens to protest and gather peacefully without arms is a fundamental aspect of India’s democracy. While it is also the right of the government to protect civilians from violent protests, certain essential principles need to be kept in mind.

Property Tax System as a source of revenue