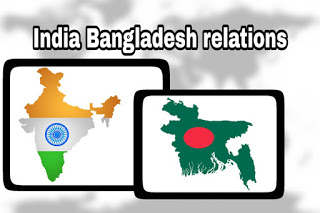 Context: All you want to read about Indo-Bangla Relationship Prime Minister Sheikh Hasina’s visit to India beginning October 3 is a much-anticipated political event. The two countries signed 7 pacts in core areas such as transport, connectivity, capacity building and culture. Three projects involving the import of LPG from Bangladesh were also launched. Historical background of Indo-Bangla relationship:

Cooperation and issues between India & Bangladesh 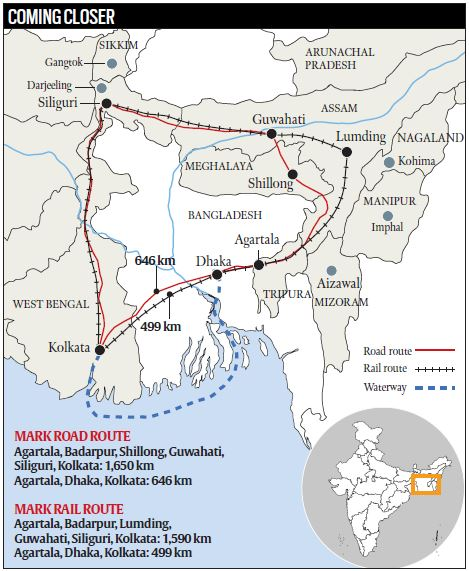 Connectivity The only connection between India’s mainland and the northeast is the Chicken’s Neck. It is a narrow strip of land. If it is cut off India will lose contact with its North East. India and Bangladesh have signed agreements which allow India to send goods and people over land across Bangladesh, connecting Bengal to Tripura. The development of Ashuganj-Zakiganj stretch of Kushiyara river and Sirajganj-Daikhawa stretch of the Jamuna river to improve connectivity between the two countries will help reduce logistics cost of cargo movement to northeast India and also reduce congestion through the Siliguri’s Chicken’s Neck corridor.   Chittagong port, which has been opened to Indian ships. It has increased the connectivity to the northeast.   Akhaura-Agartala rail project is a big boost to the development of Bangladesh and India’s North East. It also supports “Act East policy”.   Dhaka-Tongi-Joydebpur Railway project will improve connectivity between the two countries and generate more revenue.   Bangladesh-China-India-Myanmar (BCIM) Economic Corridor: The 2800 km BCIM corridor proposes to link Kunming in China’s Yunnan province with Kolkata, passing though nodes such as Mandalay in Myanmar and Dhaka in Bangladesh before heading to Kolkata.   Cooperation in international organisations India's neighbourhood policy’ has focussed on Bangladesh, which has emerged as a key interlocutor in India’s ‘Act East Policy’ and sub-regional groupings like BIMSTEC (Bay of Bengal Initiative for Multi-Sectoral Technical and Economic Cooperation) and the BBIN (Bangladesh, Bhutan, India, Nepal) Initiative. Both countries are also part of a number of groupings that seek to expand South Asia’s connectivity with Southeast Asia and China; these include the Mekong Ganga Cooperation Initiative, BIMSTEC, and the BCIM (Bangladesh-China-India-Myanmar) economic corridor project. Security The security of the northeast is guaranteed if  Bangladesh does not become a shelter for anti-India insurgents. In 2000s Bangladesh turned into a launchpad for Islamic terror activities in India. Sheikh Hasina cracked down on groups like the JMB which was allegedly supported by the previous government of Begum Khaleda Zia of the Bangladesh Nationalist Party. It also handed over the ULFA terrorist Anup Chetia to India. Defence Cooperation A series of agreements have been signed between the two countries. But there is scepticism due to the ineffectual Treaty of Friendship, Cooperation and Peace—often referred to as a ‘defence pact’—signed in 1972.

There is an exchange of visits between leaders of the two nations, as well as the conduct of training programmes, joint exercises, and humanitarian assistance and disaster relief (HADR). Sampriti, the joint exercise operation between the two armies to counter-terrorism, has completed seven rounds. Industry Since 2016, Bangladesh has been growing at 7%-plus every year. So it becomes imperative to advance economic relations with Bangladesh. India has ensured duty-free access of Bangladeshi goods to the Indian market. Bilateral trade between Bangladesh & India was $9.5 billion in FY2017-18 with exports to India pegged at $0.87 billion and imports, at $8.6 billion. Bangladesh and India are jointly working on several infrastructure development projects in Bangladesh. The rehabilitation of Kulaura-Shahbazpur section of the railway line will provide direct rail connectivity to Karimganj district of Assam and other northeastern states. Energy Cooperation India is poised to export around 1100 MW of power to meet the energy deficit in Bangladesh. Power projects totalling more than 3600 MW are under implementation by Indian companies. The central government-owned Oil and Natural Gas Corporation (ONGC) has also commissioned its biggest 726 MW-capacity commercial power project in southern Tripura's Palatana, 60 km south of Agartala. India has also become a partner in Bangladesh’s nuclear power programme, with the beginning of construction at the Rooppur nuclear power plant. The 130-kilometre India-Bangladesh Friendship Pipeline Project will connect Siliguri in West Bengal in India and Parbatipur in Dinajpur district of Bangladesh. Newer areas of cooperation: Bangladesh has provided cyber connectivity between the international gateway at Cox’s Bazar to Agartala for faster Internet connectivity in India’s northeastern States. A number of welfare measures and schemes have been introduced to commemorate the spirit of Liberation War of 1971 and honour the invaluable contribution of Muktijoddhas towards building a better future for Bangladesh. Importance of Bangladesh for India In addition to Bangladesh’s pivotal geographical location on the contested Indian Ocean, it is one of the world’s fastest-growing economies.

Security of the northeastern states: If Dhaka does not cooperate with New Delhi, it is hard to see how India can rein in various insurgent groups that might find refuge in Bangladesh. If India cannot get access to the northeast through Bangladesh it is hard to see how we can integrate those states with the heartland. And if Bangladesh does not remain a stable, open and tolerant country, we in India will have great difficulty in stopping Islamic extremists from flourishing there and from targeting our cities and towns.

Water Resources: India and Bangladesh share over 40 rivers, and these rivers are vital for the livelihood of hundreds of millions of people in both countries.

Climate change: India and Bangladesh are amongst the 12 countries that will be most severely affected by climate change. Bangladesh could lose up to 20% of its land as sea levels rise due to climate change. The ensuing turmoil in Bangladesh will inevitably be felt in neighbouring and distant parts of India. The two countries must, therefore, think about how to cooperate on conservation, alternative energy, and many other related aspects of environmental defence.

Economy: Bangladesh is one of our biggest trading partners. Given that it has been growing at over 7% per annum for the past decade and looks set to continue to grow, it is an economic asset. Bangladesh could sell us natural gas, and we could sell it for hydropower. Importance of India for Bangladesh In Bangladeshi geopolitics, India has always been at the centre. Historically Bangladesh has more cultural and societal links with India. Bangladesh is surrounded by India on three sides, and their shared 4096-kilometre land border is the fifth-longest in the world. The Bay of Bengal, located to the south of Bangladesh, is a frontier that is watched over by the comparatively powerful Indian Navy.

As a member of China’s Belt and Road Initiative, Bangladesh has seen an influx of Chinese investment in recent times. Beijing’s support of Bangladesh was evident in the 27 agreements for investments and loans signed by the two countries – worth some $24 billion. in response, India announced $5 billion in loans for Bangladesh in 2017, which is the largest amount ever invested by India in Bangladesh.

Issues in the Bilateral Relations River Water Sharing – Teesta: Sharing the waters of the Teesta river, which originates in the Himalayas and flows through Sikkim and West Bengal to merge with the Brahmaputra in Assam and (Jamuna in Bangladesh), is the most contentious issue. For West Bengal, Teesta is equally important, considered the lifeline of half-a-dozen districts in North Bengal.  Bangladesh has sought an “equitable” distribution of Teesta waters from India, on the lines of the Ganga Water Treaty of 1996.  The West Bengal Chief Minister opposed an arrangement in 2011, by which India would get 42.5% and Bangladesh 37.5% of the water during the lean season, and the plan was shelved. West Bengal however, cannot be sidestepped as water is a State subject. 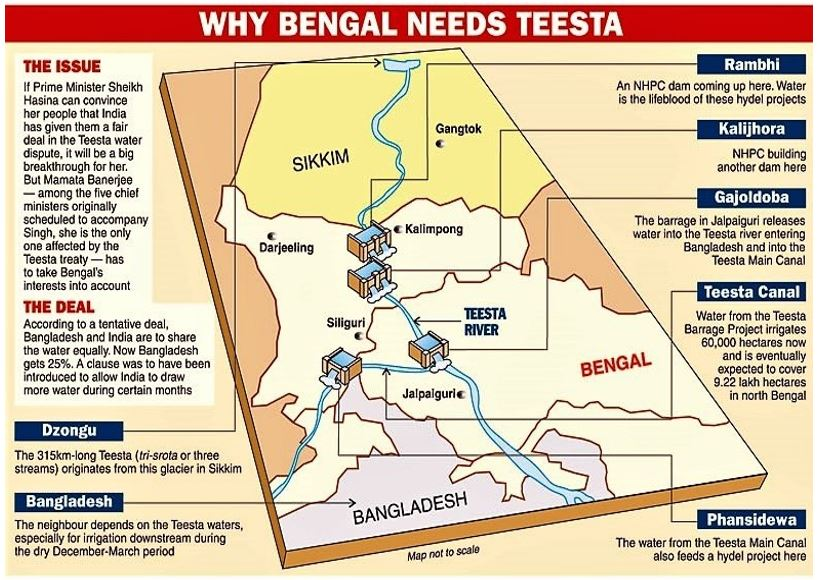 Illegal immigration: There is apprehension in Bangladesh on the National Register of Citizens [NRC] process in Assam. The question of what will be the fate of people excluded out of NRC worries Bangladesh, because many may choose to return. India is unlikely to push them into Bangladesh, but those declared as ineligible for Indian citizenship will lose all rights and privileges as stateless persons. Work is going on for the fencing of the India-Bangladesh border to check illegal immigration from Bangladesh into Assam. Cattle smuggling is considered to be the loss of losing its indigenous variety and trade for India. Cattle haats along the India-Bangladesh border are becoming a source of cattle for smuggling

Fake currency: Pakistan is using Bangladesh as a transit point to push fake notes. Bangladesh has emerged as the main source for counterfeit notes of Rs 2,000 denomination, he added. Utilising the network of the ISI and the underworld, printing bases in Bangladesh are smuggling the paper for the Rs 2,000 note from Saudi Arabia and Malaysia.

The adverse balance of trade: To enable more Bangladeshi exports to flow into India, duty-free entry was granted in 2011 under the South Asian Free Trade Area. This has led to an increase in exports from Bangladesh from around $350 million to the current level of around $900 million. To offset the economic asymmetry, India has granted Bangladesh generous lines of credit (LOCs) and grants, with commitments reaching $8 billion. While LOCs mainly cover infrastructure and connectivity projects, grants flow into social sector development.

Rohingya crisis: The Rohingya issue has become a factor in Bangladesh-India relations, though India can do very little to pressure the Myanmar government — a step that some sections in Bangladesh seem to expect. India has been subjected to considerable criticism in Bangladeshi circles for its initial lack of reaction to the crisis. New Delhi issued a mild statement alongside a massive effort to airlift relief material and other assistance to Dhaka. Bangladesh’s close defence relationship with China: China is the only country with which Bangladesh has a formal defence cooperation agreement. India wants to prevent Bangladesh from becoming a pearl in China’s “String of Pearls” strategy. 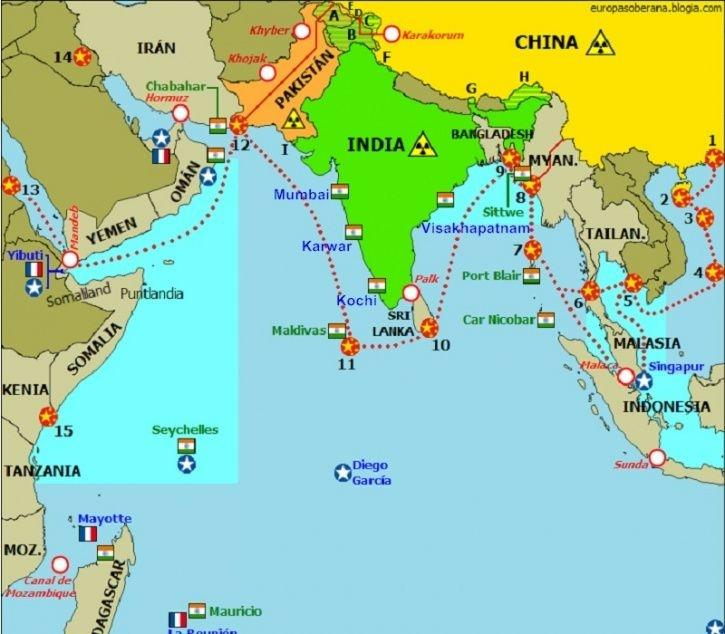 Way forward: Bangladesh is key to India’s plans to connect with South-East Asia, as well as developing the landlocked Northeast. India’s plans to forge a viable alternative to the South Asian Association for Regional Cooperation rests on Bangladesh, given its location bridging South Asia and South-East Asia. There is a need to seriously re-examine Bangladesh policy in the light of a number of recent developments. There should be better coordination and cooperation between the security and border guarding forces of India and Bangladesh, particularly in taking action on the anti-India activities on its soil as well as in extradition cases and transfer of Indian prisoners under the Transfer of Sentenced Persons (TSP) agreement. The border states of West Bengal, Assam and Tripura share geography and cultural linkages with Bangladesh and they also have greater economic and trade interactions with it. The understanding and experience of these states could provide valuable inputs to New Delhi to enhance bilateral cooperation. At the same time, bilateral relations should not be governed exclusively by the pressures from these border states, and especially that of West Bengal. Apart from more border haats, something border states have already called for, the two sides should explore the possibility of sister city arrangements to promote more people-to-people interactions. Leaders from Bangladesh should not be allowed to use Indian territory for political campaigns. In recent years, New Delhi has allowed visiting Awami leaders to criticise the BNP government and its leaders. This has generated unnecessary controversies and ill-will in Bangladesh. Unilateral trade concessions offered by India would have to be implemented and strengthened. It is in India’s interest to facilitate trade and economic engagement with Bangladesh. The strengthening of private entrepreneurship: Economic interactions would have to be promoted primarily through private and non-governmental enterprises because perceived official patronage proved to be problematic for large projects (for example, Tata investments). India should continue the current policy of remaining neutral and uninvolved. Such a posture serves India well and New Delhi should continue to maintain a correct distance vis-à-vis various constituencies within Bangladesh.