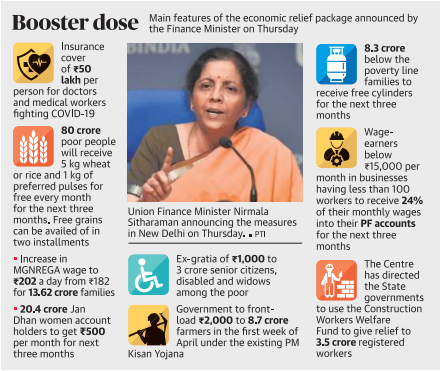 Context: A ₹1.7 lakh crore relief package was announced by the centre, in response to the COVID­19 pandemic and in turn an all-out lockdown.

What’s there in the relief package ?

It will be forwarded through a mix of existing schemes and additional sums under the Pradhan Mantri Garib Kalyan Yojana.

All in all, it is a good move to start with but more needs to be done. The challenges in implementation need to be tackled along with. A cue can be taken from the U.S. which is in the process of finalising a $2 trillion relief package. Lastly ,the government should keep itself on toes  round two of the relief package.